Confession: I haven’t written on the blog in over 2 months. Sorry, friends.

In those months, I’ve been dedicating mental energy to transitions like moving to a new apartment and starting my second year of seminary, including an internship at a church and classes on Theology, American Christianity, Preaching, and Theology & Trauma (that last one’s my favorite!). Writing-wise, I’ve published a little on The Mighty and The Mudroom. It’s funny seeing those two websites stuck together in one sentence like that — mighty and messy. Sounds about right.

But, mostly, it feels like I’ve been writing sermons for my preaching class (among other assignments for other classes). Some shorter, some longer. Some I really love, some less so.

Since that’s what I’m writing these days, sermons are mostly what I’ll be offering on the blog in the coming months — reflections on Bible passages, probably infused with my own interests in intersections of faith, mental health, and social justice.

Rejection. Dejection. That’s what Peter’s experiencing when we see him in this encounter with Jesus. He has seen Jesus crucified; he has denied Jesus three times; he has lost his hope and lost his way.

And dejection is what I was experiencing some months ago after some particularly difficult meetings at church – meetings that made me profoundly doubt my call to serve God. Like Peter, I felt that I had lost my hope and lost my way.

Maybe on occasion you have too.

But the thing is, in that very same state of despair I met Jesus. After those difficult, doubt-filled meetings, I went down the hall to the church’s empty, echoing sanctuary, looked up at a stained glass portrait of Jesus surrounded by a flock of sheep around his feet, and told that shepherd to lead me. Actually, I think I told Jesus something like “What the hell? I can’t. Just can’t. I’m done.” (Apparently sentences longer than two words weren’t working so well!) 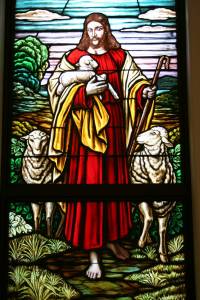 To which stained-glass shepherd Jesus replied in my mind: “Do you love me, Julia?”

“Then feed my sheep,” Jesus said.

I let this mental exchange play out three times just as it had with Peter, growing more annoyed and more amused each time just as I imagine Peter might have felt.

“Feed my sheep,” Jesus kept saying, “whatever that looks like, whether or not there will ever be a collar around your neck or a title attached to your name. Feed them the Word of God, words of hope, acts of mercy, the body of Christ, the cup of salvation. Just feed them.”

With a sigh, I would say each time: “Yes, Liz, I’m still committed to this.”

“Then feed his sheep.”

It’s a frustrating redundancy. But it’s also a necessary one. God knows we need reminders of why we’re doing what we’re doing.

1 thought on “An Update and a Sermon”